Are Water Softeners
Worth It? Can They Really Eliminate Hard Water Problem? 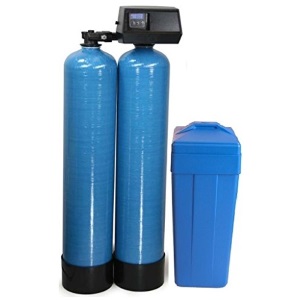 Resolving a problem – do you need a water softener or not? Is it safe to drink water from a water softener, and is using hard water for dishes and showers bad for you? Before checking out the detailed buying guide, choosing and sizing tips, recommended models, and is it worth it or not, let's see first who needs one.

Note: According to some studies done in the US, over 80% of homes have problems with hard water. A common method to neutralize or reduce the water hardness issue is water softening.

What is hard water?

Hard water is water that contains more than 1 grain of minerals per gallon (GPG) of dissolved minerals, which is coming from rocks, and it includes mostly calcium and magnesium. In order to check if your water is hard or soft, or moderate, buy a water test kit.

After the treatment, where the minerals are removed through the process of softening, hard water becomes soft.

The symptoms of hard water

The presence of hard water in homes can be indicated by:

The effects of hard water and problems

According to WHO (World Health Organization) (opens in pdf), hard water is not harmful to human health. There are some cases showing skin-related problems, such as rush, probably due to changed PH value.

If you live in an area with a hard water supply, it is well-known that hard water may shorten the water heater's lifespan. Not only that water heaters are affected – all home appliances that heat up water suffer from the scale buildup, so the logical solution is to install a water softener, a separate device that descales water and protects your household goods.

To answer the question can the water be softened by boiling it, it is important to mention that hardness can be temporary and permanent. Yes, temporary hardness, which is caused by dissolved calcium hydrogen carbonate, can be removed by boiling water, but it breaks down to form calcium carbonate, which is the cause of the limescale.

On the side, permanent hardness caused by dissolved calcium sulfate cannot be removed by boiling the water.

And, yes, you can drink soft water, but according to the research, it is healthier to drink hard water, as it contains important natural minerals which are removed during the softening process.

There are several types of water softeners on the market, grouped in salt-based and salt-free categories, which can operate as automatic, semi-automatic, or manual.

As water softening involves the removal of calcium and magnesium ions from the water, you can have the same effect as the softener by simply adding washing soda or sodium carbonate.

The salt-based type is the most popular type and is widely used. These are found as ion-exchange softeners, as described below. While the main advantage is its effectiveness, the disadvantage is the salty taste of drinking water.

This type uses potassium chloride instead of sodium, and it is recommended for homeowners who prefer the salt-free taste. Salt-free water softeners are also known as descalers. The advantage is that the minerals are not removed from the water but prevented from being deposited as scale. The disadvantage is that the device is not efficient in a very hard water environment.

Magnetic type uses magnets to treat water passing through the pipes. The magnetic field will alter the water chemistry. The small size and lower prices are for sure the advantages over the other two types, while the disadvantage is that water, once it leaves, the magnetic field becomes hard again, usually after two days.

When talking about water softening systems in homes, one system can be considered conventional, and that is a salt-based ion-exchange softener, which is reviewed below.

How does an ion exchange water softener work

First, let's see what an ion exchange water softener is.

An ion exchange water softener is a device that removes undesirable substances (mostly calcium (Ca) and magnesium (Mg) ions) and replaces them with sodium chloride ions; simply, instead of calcium and magnesium, the salt is fed to the water.

The system consists of a cabinet that houses an ion exchanger. There are two components inside – a container with the little resin beads and the other one with a brine. Water flows through the resin, which attracts Ca and Mg ions and releases sodium ions.

When the resin becomes saturated, the regeneration process starts – brine is being flushed to bath the resin beads and remove captured ions.

All parts fit in the single cabinet or two cabinets (one for the resin and the other for the salt), but don't be confused – manufacturers also offer a duplex system with two exchangers. You could find it under the name "dual-tank water softener."

A dual-tank softener provides a non-stop functioning, including the regeneration cycle. When one exchanger is disconnected from the water supply because of "recharging" and renewing, the other one jumps into its place to provide full comfort to the user.

So, the hard water is softened as it no longer contains magnesium and calcium ions.

How to buy a water softener - Tips

If you have decided to buy a water softener, acquire some information in advance. We suggest considering the following.

Grain capacity. The first numbers which will attract your attention are those about grain capacity. You may find 32.000 / 48.000 / 64.000 grain (weight unit) softeners, meaning that the device can remove that quantity of scale in one cycle before regeneration is needed. However, this is not a reliable sum because it depends on the variable conditions. The following two features are more important.

The volume of the resin. The usual volume of a home softener is 1 or 1.5 or 2 cubic feet.

Efficiency. Efficiency is the most interesting detail you have to look at, according to experts' advice. Search for Softener Efficiency Rating (SER) in technical specification and choose the softener, removing 3,333 to 5,000 grains per pound.

Resin quality. The resin is, actually, plastic, which is better to be harder. The number you are searching for is the cross-link percentage. Choose 10% if you can, but 8% is still good.

Service Flow Rate (SFR) in gallons per minute, which is often in the 15-20 range, is the amount of softened water that a softener can produce. This data is the maximum available rate, not the real one. If you want to calculate how many SFRs you need for the perfect soft water, consider water hardness and the number of demanding appliances in your home. Softening the water for a hot water heater requires a resin volume of more than 1 cubic foot and a softener SFR of more than 5 gallons per minute. If you have additional appliances, performance requirements rise.

Device size. If you plan to buy a central softener to attach it to the house installation, measure dimensions of free space, usually in the basement of the house. Smaller devices for one appliance can be installed, for example, in the kitchen below the sink.

Certification. There are two important tags to check in, both available in the US and Canada. The NSF International (National Sanitation Foundation) tests water-treatment products and issues certificate, and Water Quality Association delivers WQA Gold Seal.

As with any other device, water softeners cannot last forever. It is expected to have them last at least twenty years, as long as you maintain them occasionally, such as filling them with salt. The tank and control valve is subject to the warranty, usually ten and five years respectively. You may find less than the 5-year warranty for the control valve, but the manufacturers of the best brands (Pentair, Clack, Autorol...) offer five years.

All features mentioned above can serve as a good basis for comparison before purchase.

The pros of installing a softener are clear–protected appliances, less limescale on taps and dishes, faster water heating, better performance of shampoos and detergents, longer life of a water heater, but are there any cons?

Besides the additional plumbing work and bills for the salt, the maintenance of the softener is also needed. There are dilemmas about health impact – soft water is not recommended for drinking and cooking for the long term, and it tastes different. Some recommend separate tap, out of softener influence, for drinking purposes.

Hard water means that there is a higher mineral presence than in ordinary water. When water is hard, it can cause limescale deposits in the plumbing and water heating system, even the pipe clogging and element malfunction, followed by the increased heating costs, reduced performance, efficiency, and shorter unit life. It can be considered more as an expense than a health problem.

Scale deposits inside the electric water heater, especially on the heating element, cause overheating, bad performance, higher energy bills... the similar thing is happening inside the tank of gas water heaters, even in tankless water heaters.

That is why, in order to prevent the negative effects of hard water, it is recommended to install a water softener. And as salt-based systems are mainly used and effective, they are your best choice.

Buy the best one as the quality and reliability, including the efficiency and performance, are very important as all the water inside the home passes through that device.

Get Help from a Local Plumber. FREE Estimates!

Other ways to save on water heating

Copyright. All rights reserved
Disclaimer: The content published on hotwatertalk.com is not professional advice. You should consult with a licensed professional and check local permit requirements before starting any project.

Hotwatertalk.com is a participant in the Amazon Services LLC Associates Program and other affiliate advertising programs, designed to provide a means for us to earn fees by linking to the affiliated sites